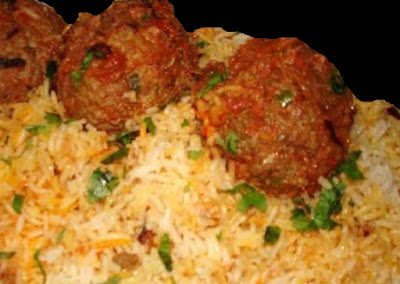 Another gift from Mughal era in India and its called Pearl Biriyani. This Delicious food is also called Kofta (meatball) Biriyani and Shahi Moti Biriyani and is very famous in Indian subcontinent. It is true that Mughals are the people who revolutionized Indian cooking culture and eating habits, during mughal era the royal cooks competed with each other and kept  kept experimenting a lot in the kitchen, and did get high rewards for it as well. 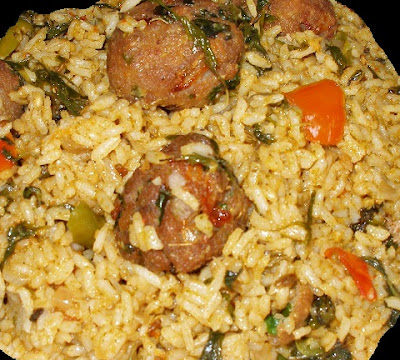 In 19th century Mughal kingdom was in decline, mughals were just front men and the nation was ruled by British. It was 19th century when this dish was invented by cooks of Wajid Ali Shah who was king of Oudh from 1847 to 1856, the dish was to meet the royal standards. They prepared edible pearls by  first beating some exact quantities of gold and silver foils with egg yolks. Which created small silver and gold colored pearls, that was later stuffed into the cavity of a chicken. This chicken was either cooked directly (grilled or immersed into the pilaf). When the chicken was done, it was cut open and the edible shiny gold and silver beads came out of the chicken, just like luminescent pearls. These little pearls were added to the biriyani or pulao just before it was served. If you like it please do use comment box below and do not forget to subscribe our site to get new recipes everyday, we don't just share the recipes from around the world, we dig the history for you to bring some of the best recipes for you and we bring the memories of ancient life into your kitchen.

In a bowl add cornflour, turmeric powder, 1 tbsp red chili powder, ginger and garlic paste, salt and chopped green chilies, mix well, add mince meat and mix everything very well.
Make small balls of the mixture and layer them in a glass glass dish and microwave in high for 7-8 minutes.
Heat 1 tbsp oil in a pressure pan, add cloves,cinnamon, green chilies, black cardamom, ginger garlic paste and onions and cook for 1 minute, add tomatoes and the mint leaves.and saute well with turmeric,salt and 1tbsp red chili powder, cook till tomatoes are soft and pulpy, add meat balls and cook for another 5 minutes till everything is blended well.
Add rice and 4 cups water and pressure cook till 2 whistles.
Enjoy...

Promote your Page too

Izzy recipe is website about sharing professional food recipes from around the world with bit of history to the recipes and we do intend to give bit of Indian subcontinent touch to the recipes but will try our best to keep it as original as possible. The site was designed and built just for one purpose to share the knowledge and experience we gained through years of struggle and share it with our respected readers. Our top priorities for the website are to gain your trust and readership by ever striving to providing some of the best recipes and tips on daily needs of healthy food. We strongly believe in healthy living but sometimes will share some sweet taste of India and Pakistan as well. We will be bringing at least one recipe for your daily. We share with you quality and trustworthy tips and recipes twice daily in a user-friendly, and easy navigational format.